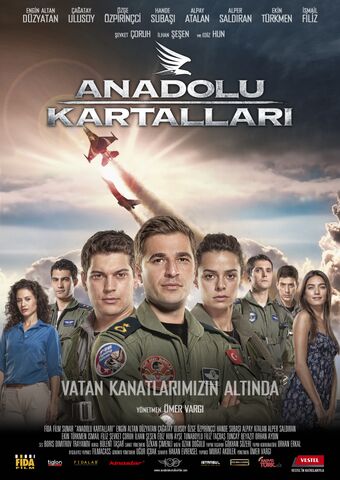 “The Fatherland is under Our Wings”

Five students at the Military Academy who have always dreamed of flying:

Onur, who is hiding his dream of joining the Turkish Stars, whom everybody considers a “born pilot”, only child in the family,

Ayse, who grew up with Onur, daughter of a pilot killed in mission,

Mustafa, who wants to become a pilot perhaps more for the sake of being close to Ayse than to fly,

Tunç, who is prepared to sacrifice whatever necessary in order to fly,

And Fatih, a source of gaiety for the whole group…

They all pass the detailed examinations of the Air Hospital at Eskisehir and become the students of Kemal, the strict Fleet Commander at the Flights School in Çigli. They help each other during months of difficult, stressful and tiring training, and finally graduate from the Flight School.

The young air officers become separated by various missions after their tough military training in Konya and Ankara until the International Eagle of Anatolia Maneuvers.